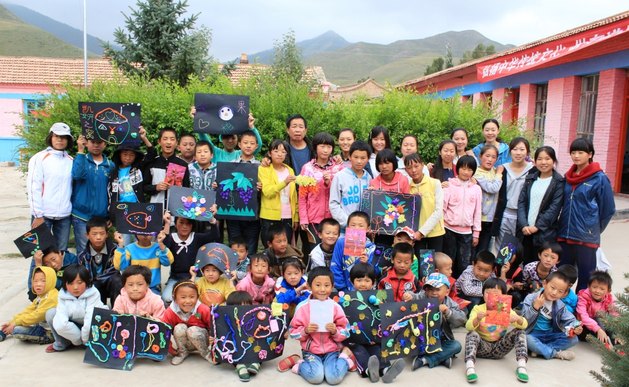 In late August 2014, Thin & High organized a volunteer teaching summer camp in Kuangou village in China’s western Gansu province.  This was a follow-up of a similar event held in 2012.  Kuangou Elementary School, which was initially slated for closure in 2014, has managed to avoid the dismal fate not only through the efforts of Thin & High in organizing summer camps, but also through Thin & High’s continuous donations, visits to the village, medical assistance for critically ill children, as well as interactions with local officials.

Most of the adult population from the village work as migrant workers in cities, leaving behind mainly children and the elderly who try to supplement the family income by growing wheat and herding sheep.  Many who have the means had already chosen to leave the village to settle down in urban areas, and the village now has a population of only 1600.

As a result of the declining population, the only school in the village is now comprised of fewer than 30 children that are taught by substitute teachers who – though dedicated – do not possess professional teaching qualifications.  The difficulty in getting permanent and trained teachers for the village is largely due to the low pay, limited opportunities and difficult living conditions.  The current situation stood in stark contrast to the school’s heyday, during which it was a well-staffed institution that provided comprehensive education to young people in China’s western provinces.  Built in 1777 during the Qing dynasty by Mao Qu, the top county official who spent his entire life and even personal savings ensuring the development, viability and security of this frontier region, Kuangou School is the area’s oldest educational facility.  To pay tribute to Mao Qu’s progressive contributions in the less developed western region, Thin & High erected a monument to honor this visionary with the hope that future generations will remember his legacy with gratitude.

During the volunteer teaching program, undergraduates from various universities across China taught children from Kuangou village numerous subjects and skills such as music, dancing, arts and crafts, ancient Chinese classics, martial arts, and various forms of outdoor activities, which are not part of the children’s limited rural curriculum.  The children had a wonderful time learning and showing off their newly-acquired skills and confidence, especially on the last day when a campfire party was held to celebrate the completion of the event.  Click here for details of the volunteer teaching program and click here to view a slide show of the summer camp (if you use Internet Explorer and it opens the file as individual slides, please press F5 to start the audible presentation).

The children were also greatly inspired by a volunteer teacher whose entire right leg was amputated when she was 13 due to bone cancer.  Though confronted with daily challenges, the 21-year-old has remained upbeat, cheerful and optimistic; she even recently gained admittance to a university where she will major in journalism.  During their interactions with the young volunteer teacher, the Kuangou children learned that with strong faith and conviction, they would be able to overcome all seemingly insurmountable obstacles and challenges they encounter in their daily lives.

Click here to read the memoirs of the volunteers about their Kuangou experience.