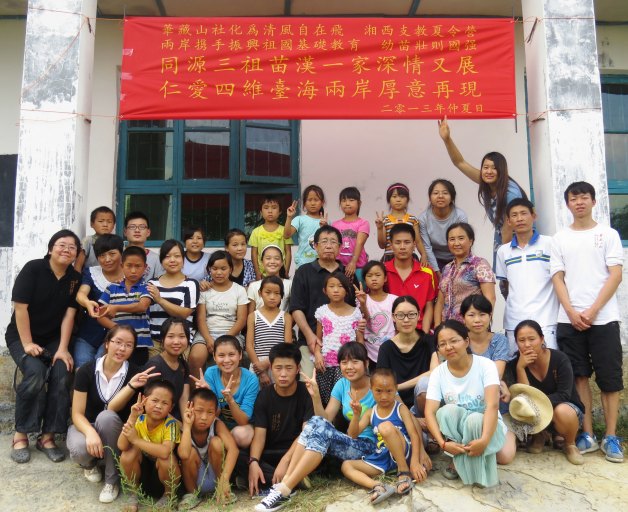 In late August 2013, Thin & High organized a volunteer teaching summer camp in Qidou, an ethnic Miao village in southwestern Hunan province.  There are about 40 households in the village and more than half of the adult population work as migrants in more prosperous parts of China; those left behind in the village are mainly children and the elderly, who try to supplement the family income by growing and selling tobacco leaves.

In the past 14 years, the only teacher in the village has been a “substitute”, Mr. Wu Xiucong, himself an ethnic Miao minority.  The difficulty in getting permanent and trained teachers for the village is mainly due to the low pay, limited opportunities and difficult living conditions.  In addition, rural teachers often have to serve as nannies for their students as many of the students’ parents are working elsewhere as migrant workers.  Not only do the rural teachers have to cater to the education needs of the children, they also have to take care of the students’ physical, emotional and psychological well-being.

The impetus for the program came from the late Madam Chuang-Hwang Yuin Lien, a former elementary school teacher in Taipei, Taiwan.  Madam Chuang-Hwang had dedicated her life to educating young children as she believed that the future of a country depends on the caliber and integrity of its younger generations, and she bequeathed some funds to the education of rural children in mainland China before she passed away.

During the volunteer teaching program, undergraduates from various universities across China taught the rural children numerous subjects and skills ranging from music, art and craft, ancient Chinese classics, to dancing, philosophy, astronomy and various forms of outdoor activities, which are not part of the children’s limited rural curriculum.   In addition, Thin & High volunteers provided the children with the much-needed medical attention for their skin problems, which otherwise would have left them with life-long scars; the unfortunate prevailing mindset among the children’s grandparents and guardians is that it is more important to fill bellies first before worrying about insect bites, sores and wounds, which often fester in the humid environment.