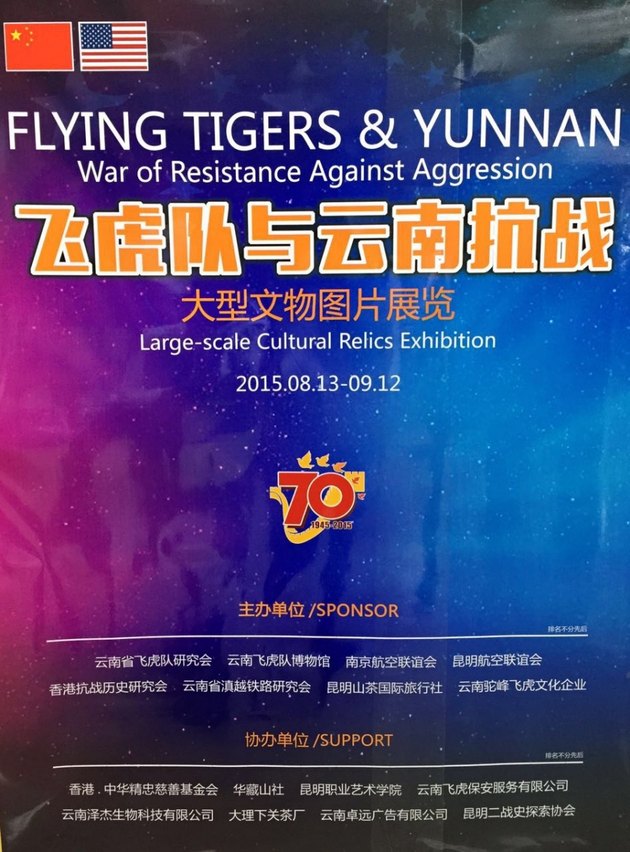 In August and September 2015, Thin & High jointly organized a series of activities with several organizations in Yunnan, China to mark the 70th anniversary of the Chinese victory against Japanese aggression and to commemorate the significant contributions made by the Flying Tigers during World War II.

On August 13, 2015, an event entitled “Flying Tigers & Yunnan, War of Resistance Against Aggression” was hosted by Thin & High and the Yunnan Flying Tigers Association in Kunming, China’s Yunnan province.  It involved the unveiling of a sculpture of General Claire Lee Chennault, who was the American aviator best known for his leadership of the 1st American Volunteer Group, more commonly known as the Flying Tigers, which was composed of pilots from the United States Army Air Corps, Navy and Marine Corps recruited under presidential authority; the group consisted of three fighter squadrons of around 30 aircraft each, and it trained in Burma before the American entry into World War II with the mission of defending China against Japanese forces.  Over 200 people attended the event, including the U.S. Ambassador to China, Max Baucus, and the U.S. Consul General in Chengdu, Raymond Greene.  Other participants included Chinese officials, war veterans, descendants of war veterans, as well as scholars and members of the public.  Click here to read the speech by Thin & High Founder, Bernard Yang, during the event.

On September 3, 2015, Thin & High and the Yunnan Flying Tigers Association organized a seminar on the history of the War Against Japanese Aggression.  Attended by scholars, historians and war veterans, participants heard various accounts of Japanese atrocities and the difficulties and suffering endured by both combatants and civilians during the eight-year battle.

In addition to helping to put together a Cultural Relics Exhibition on the Flying Tigers and Yunnan, which was open to the public from August 13 to September 12, 2015 at the Yunnan Flying Tigers Association Museum, Thin & High also donated memorabilia and WWII military tools to the Museum.  Through the display of artifacts, photographs and memorabilia, the veterans’ stories of courage, determination and sacrifice are preserved and passed to future generations.

By honoring the contributions of the Flying Tigers in China during WWII and commemorating the 70th anniversary of the victory against Japanese aggression, Thin & High hopes to strengthen not only the relations between the United States and China but also the bonds between generations.