Search and recovery of the Praying Mantis 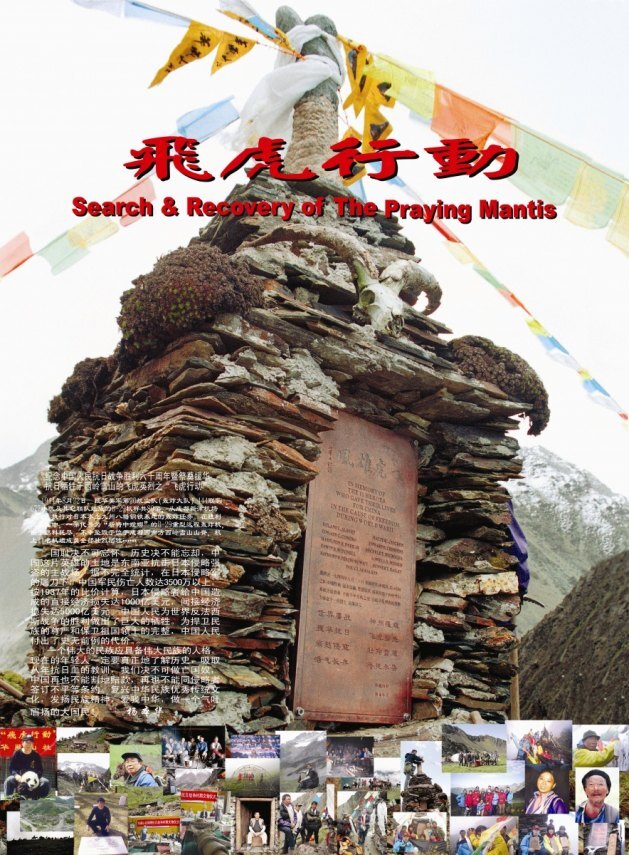 On August 20, 1944, 88 U.S. Army Air Force B-29s based in Sichuan, China launched a daylight bombing mission over Japan to destroy the major steel mill in Yawata.  Among the 14 warplanes that were lost was a B-29 nicknamed The Praying Mantis — #42-6286, which was assigned to the 444th Bomb Group of the 58th Bomb Wing.  On its way back, it ran out of fuel about 100 kilometers from its base in Chengdu and crashed into the remote ShiLing Snow Mountain.  All 11 crewmembers on board were missing and all subsequent search and recovery efforts had failed.  Click here to watch a TV documentary on the background of the Praying Mantis.

In July 2001, Thin & High organized a 9-member team to search and recover the wreckage of the Praying Mantis.  They had to endure bone-chilling temperatures, torrential downpours, dense fog, rugged terrain as well as high-altitude sickness before reaching the 4,524-meter hilltop crash site.  They recovered more than 500 pieces of debris; the large pieces were donated to the Chinese National Museum in Beijing, China while the smaller pieces were brought back to the United States, examined by U.S. Air Force historians, confirmed to be relics of B-29 #42-6286, and then donated to the New England Air Museum, home to the 58th Bomb Wing Memorial.  Click here to view a slideshow of the Praying Mantis exhibit at the New England Air Museum.

In July 2004, Thin & High organized the second expedition to the Praying Mantis crash site.  They brought with them a bronze plaque inscribed with the names of the crew, and the plaque was installed in a 10-foot pagoda built by the local Tibetans.  The completion of this monument fulfilled Thin & High’s vow to pay proper tribute to the 11 heroes who gave their lives for China in the cause of freedom during WWII.  Click here to read the diary of Zong Shu, the only female team member of the expedition.

In August 2005, to commemorate of the 60th anniversary of the end of World War II, Thin & High led a team of 11 students from 4 Sichuan universities to crash site to pay homage to the fallen American heroes.  The goal of this expedition was for the younger Chinese generation to learn the true version of history as well as for them to realize that some 60 years ago, Chinese and Americans had worked together side by side and that there were selfless Americans who were willing to sacrifice their lives to help China.  Thin & High believes that recognition of past cooperation is crucial to the improvement of bilateral relations between China and the U.S. today.  Click here to watch a TV documentary on this expedition and click here to read an essay by Tu Yuan, one of the students that participated in the expedition.

In early October 2019, five Thin & High members undertook the fourth expedition to the Praying Mantis crash site.  The purpose of the five-day journey was to mount a 6-meter high commemorative stainless steel pole on the ridge believed to be where the B-29 crashed; other paraphernalia, including a wooden Buddha statue, prayer flags, wind bells and reflectors, were also mounted there.  The pole, flags, bells and reflectors are meant to draw the attention of future hikers to the location and subsequently to the history of the crash site; the statue and prayer flags are a symbol of respect to the many ethnic Tibetans who live near the area and who practice Tibetan Buddhism.  Click here to read Cheng Yong’s detailed account of the expedition.

It is the sincere wish of Thin & High that our Praying Mantis project has promoted not only the longtime friendship between the Chinese and American peoples since WWII but has also strengthened the bond between generations.
Click here to view the annotated photo albums of the Praying Mantis project.